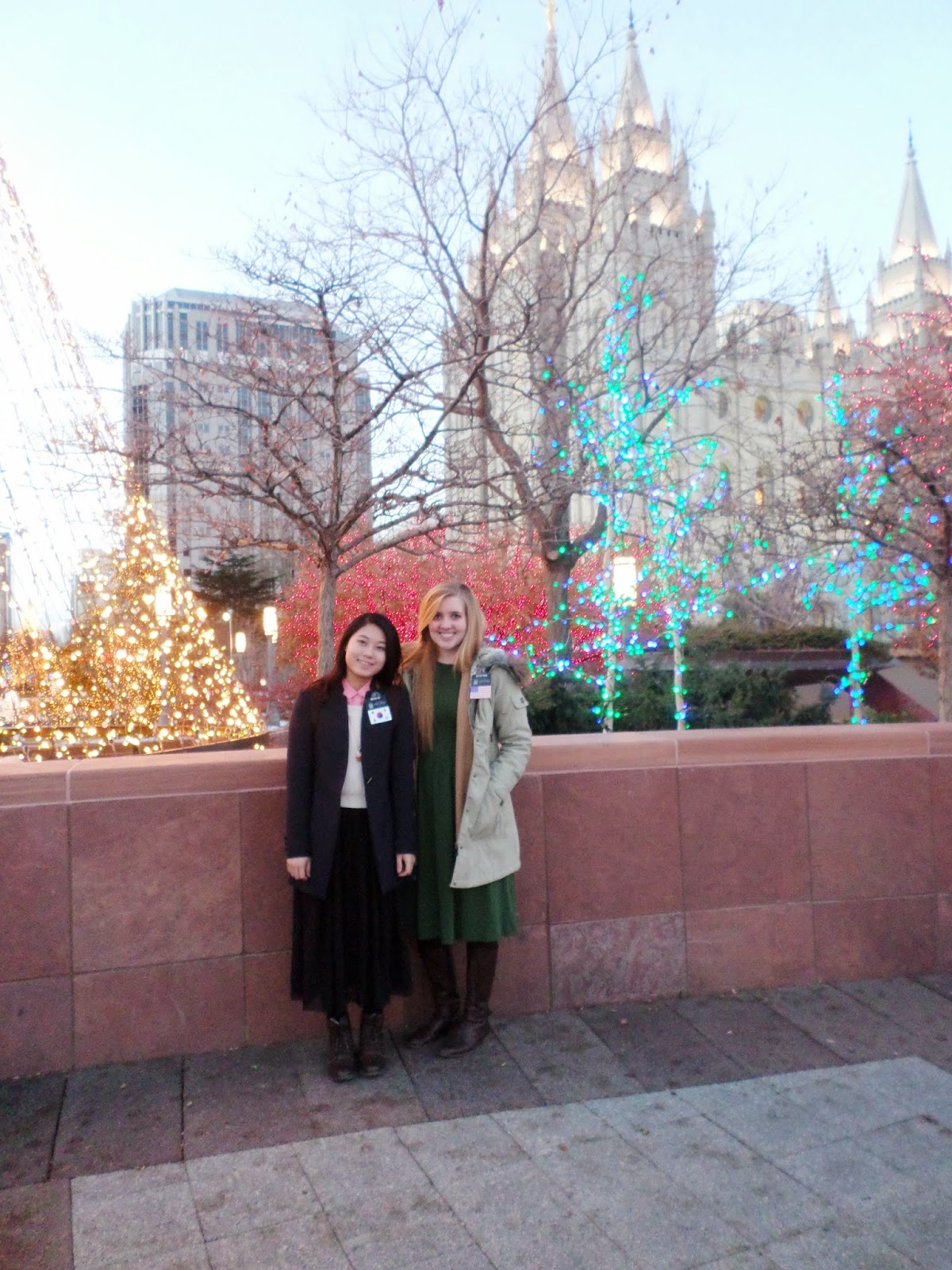 Posted by Unknown at 8:32 PM No comments:

On Sunday the mission President asked to have the names of every sister that hasn't attended a temple sealing (marriage). We will all have the apportunity to attend one! Today I will go to the sealing of a woman from Pakistan and a man from Spain. The couple wont have many guests because they are foriegn, so they welcomed 18 sister missionaries to attend. President Poulsen is organizing a way for everyone who has never seen a sealing to go to one sometime during their mission. Since we teach guests about the temple and what it is used for daily through a model replica of the SLC Temple, he wants us to better understand what we are talking about. So it makes sense. I am so excited to attend! Not everyone in the assigned group that I am in has pday today, but I still want to go even if it is pday. Sister Oh however is on exchanges because she will be able to have another chance to attend a sealing.
Zone activity last week was so much fun! The Moore's were so kind to host our zone. They have a cool house. They have an ottoman made out of real zebra! I need to make up my mind if I am all save the animals or all for furniture made out of them...
Earlier this week Sister Oh and I were able to show a member around with her friend who was visiting from Georgia. The tour went very well and the woman was very interested in learning more. While at the Christus statue I invited her to take a free copy of The Book of Mormon and she was super excited to take it that I wasn't sure how to respond to her energetic and excited response. It was a great teaching experience though.

Clayton Christensen came and spoke with our mission last week. And today we had Brother Kay from the missionary department come and speak to us about the HE IS THE GIFT campaign. You need to watch the video, here it is:
http://www.mormon.org/christmas
We have been able to teach so many people lately. With the lights on their will be an entire new atmosphere to teach in.
For Thanksgiving we are going to members homes! Each companionship has been assigned a home and the members will pick us up at Temple Square. The square will close 12-6pm and then regular hours around that. SO FUN!

Doctrine & Covenants 78:19
"And he who receiveth all things with thankfulness shall be made glorious; and the things of this earth shall be added unto him, even an hundred fold, yea, more."

The Savior is the sweetest. I am so grateful for the Savior, He is why I am serving a mission and He is who has given me strength every single day I've been here. Thank you everyone who has been of support as well--I am grateful for you too!

Much love,
Sister Price
Posted by Unknown at 2:10 PM No comments:

Sister Oh and I have had a great week. We were able to find two new investigators while in the teaching center before coming to email today.
Zone Activity is today and we will be going to Elder and Sister Moore's home. They are a senior couple serving as the secretaries of our mission.
Last night we took a Korean tour together, I am starting to naturally bow when we meet Korean people.
Sister Oh has been trying to teach me more Korean, but I forget it all very quickly.
On Sunday we attended Music and The Spoken Word! It never gets old. In the picture you can see our roommate Sister Worthen (the Kiwi) trying to get in. The mission is going so well! To be honest I don't really know what else to say in my emails these days.

Love you all though!
Love, Sister Price

Posted by Unknown at 7:43 PM No comments:

This past week we have been busy with exchanges. I especially enjoyed being on exchanges with Sister Escobedo at Welfare Square. We took several tours, but also were able to be hosts in the Bishop Storehouse. Everyone we helped had Spanish order forms so Sister Escobedo and the guest enjoyed laughing at my pronunciation. It was fun.
While on exchange with Sister Polanco we took a family from Florida (originally Puerto Rico) around the square. They were very interested in learning more and will keep in touch with us.
At a training I was able to give instruction about companionship unity. I was able to connect my lesson to Nutella. Any excuse for chocolate, right? I am working on self mastery now and set a goal to not have chocolate until I get home (at least). I wonder how long that will last.
Sister Oh and I have had a lot of success teaching and contacting people in the teaching center (basically a calling/computer center). The square is slower than usual these days, but that will pick up once the holiday lights turn on.
The other day we were talking to a member who said "So do you just walk around the square all day?" Now I need to practice humility because of the slightly sassy way that I responded. It wasn't mean though! Just a little sassy.
Sister Oh is teaching me Korean. So far I can say:
It's a dog
It's a bird
It's a tree
Baptize
Thank you
Hello
Bye
The first three aren't really helpful. You never know though. One day I could be in Korea and save someones life with the first three! Probably not though.
Well I love you all!
Sister Price안녕
Posted by Unknown at 7:39 PM No comments:

Oh! Sister Oh from Korea is my missionary companion now :) We are assigned to nothing specific, which is great! We have desk assignments, square time, and time in the teaching center like everyone else. But nothing specific like Beehive House, Fleet, or Welfare Square. My district is great! In my district are two other companionship's. Sister Polonco (Guatemala), Sister Armendariz (Mexico), and Sister Jarvi (Finland) who is in her first transfer and being trained by Sister Escobedo (Mexico) who I was training a year ago! I was so surprised to have her in my district, but it is awesome!

I am excited to be go on exchanges with Sister Escobedo since we were already companions :) Plus, she serves at Welfare Square 3x a week, so I will get to go on exchanges there at least once this transfer.
Being with Sister Oh is great! She is in her 3rd transfer now, but is so ready to work. I am very lucky to have her as my companion.
For Halloween we went to the Temple as a mission, it was a very special experience.
Fleet was fun at times, but I don't miss it. I am grateful for the experience, but it was much more work than I thought it would be so it is nice to be more of a missionary without fleet as my assignment now.
My roommates are Sister Worthen (New Zealand) and Sister Rasheed (Pakistan). Sister Rasheed is in her 2nd transfer of being trained. We wrapped Sister Rasheed up in "spider web" and she hid in Sister Sherratt's closest and scared her. She also scared Sister Oh, but that wasn't planned...just conveniently humorous.
Sister Oh and I have been having countless miracles talking to great people on the square. Everything is going well.
I love you all,
Sister Price 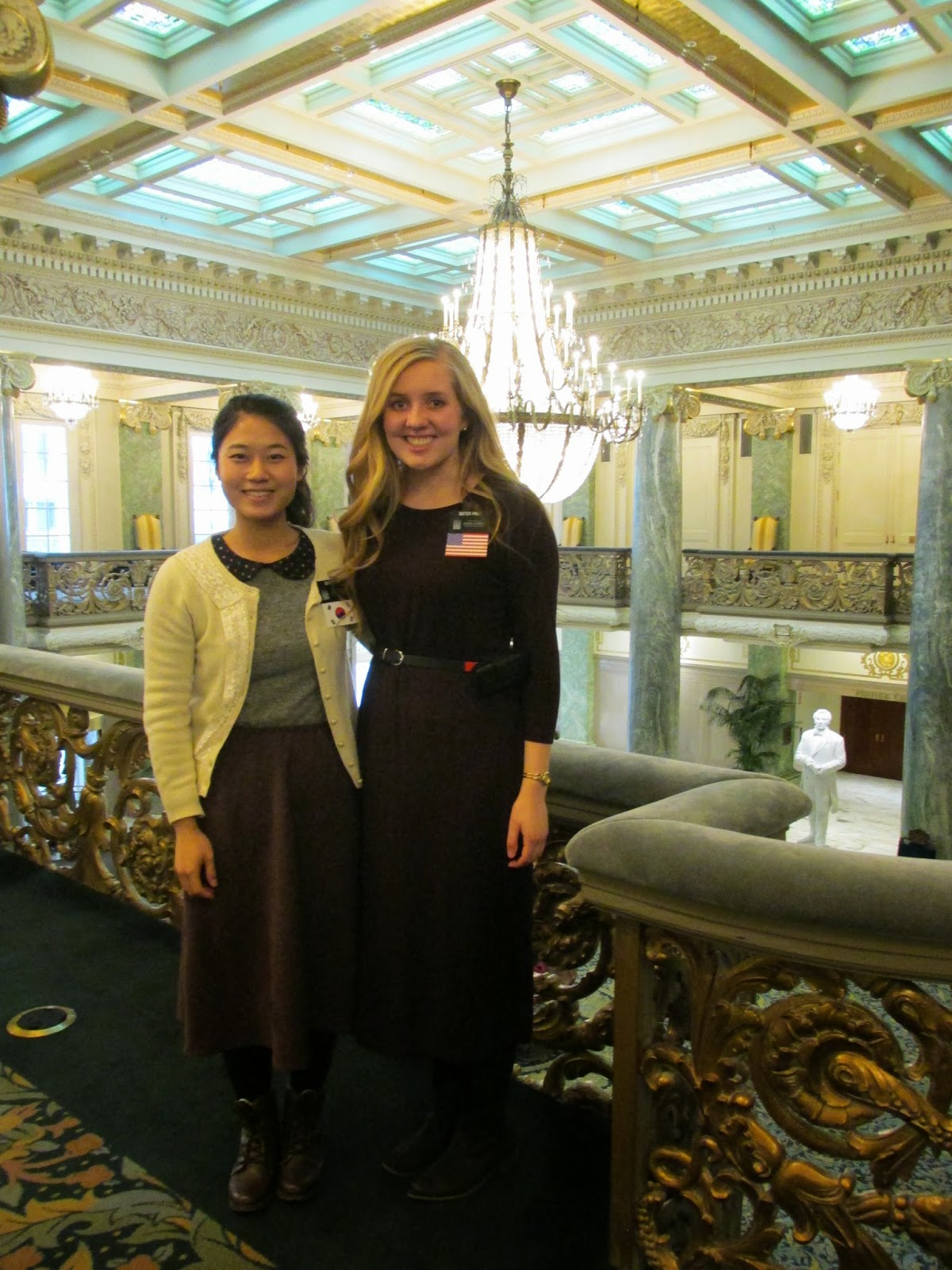 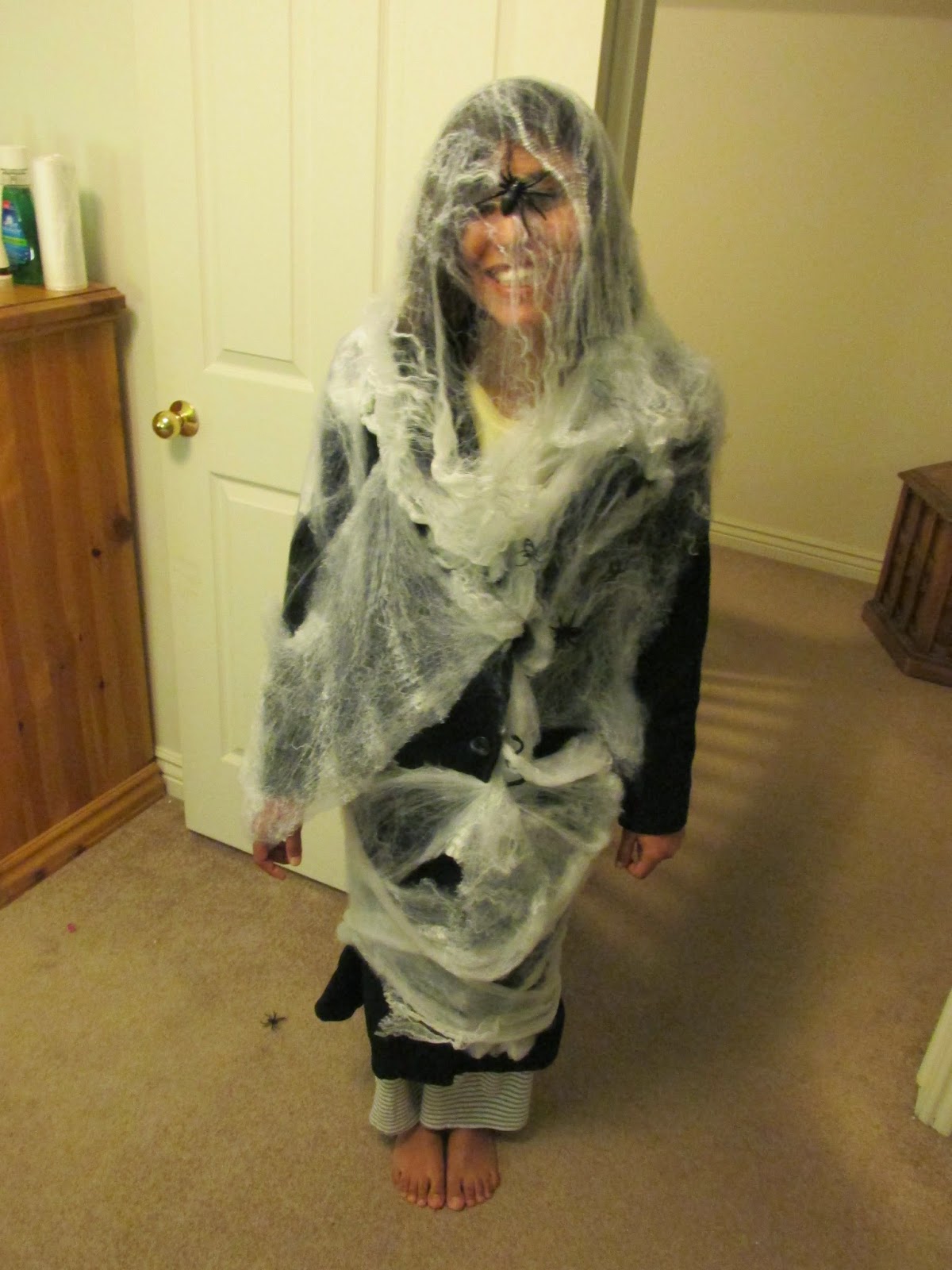 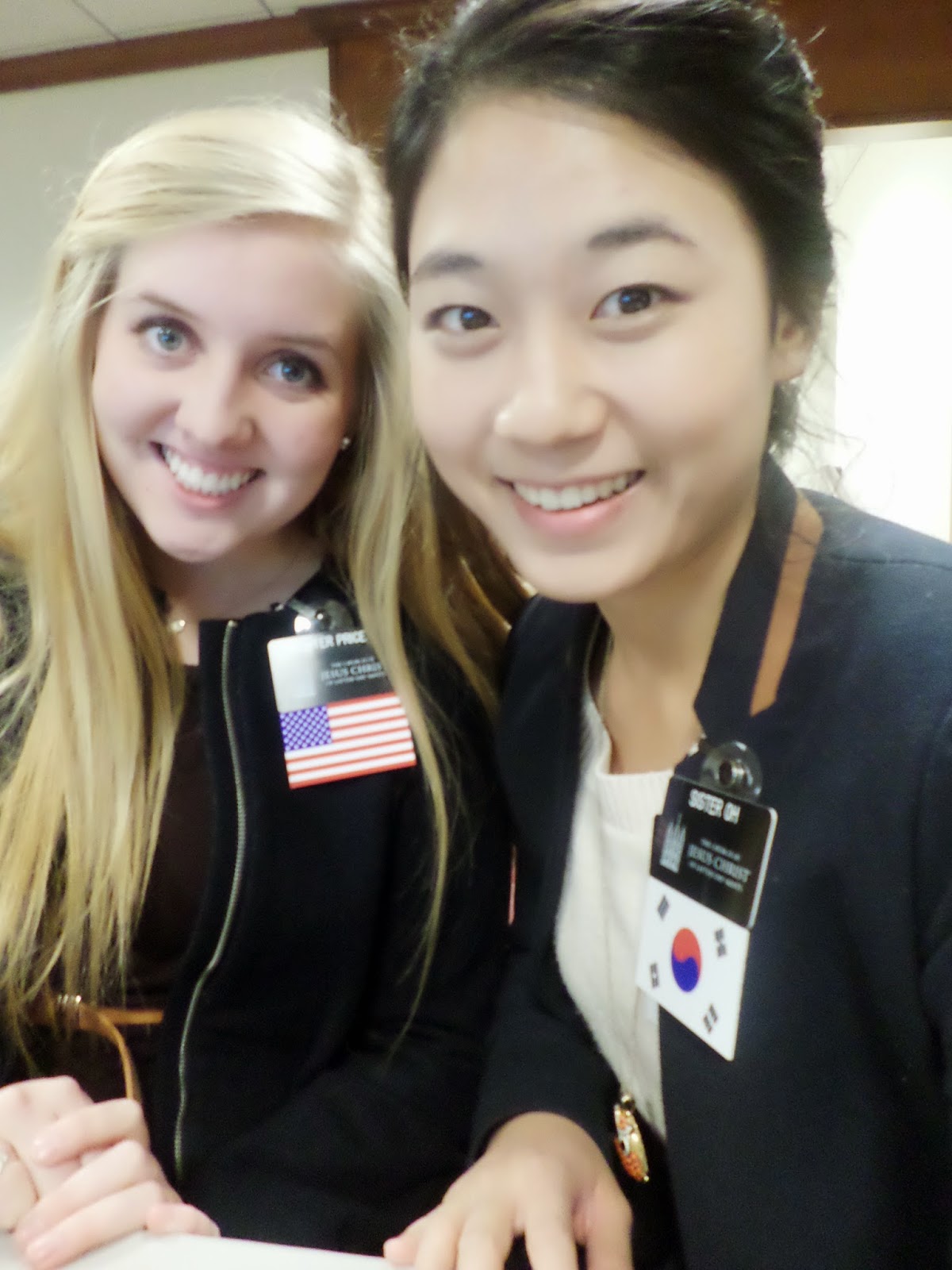 Posted by Unknown at 5:52 PM No comments:

This week Sister Stufflebean and I were able to get a hold of Carina our new investigator in Romania. It was our first time talking to her since we met at Temple Square. Because of the time difference it is easiest for her to be taught through email. Still, we will try to continue to keep in contact with her over the phone. We are praying to get her in contact with the local missionaries, we just need Carina's address.
This morning the outbound sisters were announced. 25 sisters are going outbound! Sister Stufflebean and I have been busy arranging the needs of 60 sisters going to and from the airport on the 29th. It is interesting. Seems like despite my wishes Sister Stufflbean and I will split and she will remain as fleet. On Monday I will find out who will kill me. (who will send me home).
Well take care everyone!
Love, Sister Price

On Wednesday we were on exchanges so my companion for the day was Sister Hadzik from Germany. We were able to take one tour in German. The season is slowing down. In the summer the German speaking sisters are taking many German tours a day.
Even with the season being slow (slow compared to summer) Salt Lake City hosts many conventions and meetings of sorts. Girls Scouts of America have been everywhere recently.


Thanks to the Leavitt's of our home stake Sister Stufflebean and I had the pleasure of giving  Kateryna Yushchenko, the former first lady of Ukraine and her assistant Maryna Antonova a tour of Temple Square. They were so kind and both my companion and I enjoyed showing them Temple Square.
This week we took a lesson with sister missionaries who brought there 9 year old investigator and her member mother to Temple Square. The young girls was so cute and after watching a touching presentation and talking with her, she began to cry. It was sweet to see the spirit touch a young girl like that.
On Sunday we received news that the entire mission would meet in a theater at 7pm until the rest of the night for a special fireside. This was puzzling considering the question of: how will the square function without us? About 40 return missionaries of Temple Square came to cover assignments and organize the square! The square wasn't able to function it's usual way, but they made it work. Well ANYWAY the fireside was so special because the guest was David Archuleta! It was so great! His family even came. With 200 sister missionaries going reverently crazy we organized pictures according to zone.

David sang the following for us:
http://meetthemormons.com/post/98919605769/david-archuleta-glorious-music-video
He also shared experiences that prepared him for his mission and experiences he had on his mission. It was a fantastic fireside! There was a Q&A as well.
As usual, all is well here!
Much Love,
Sister Price
Posted by Unknown at 1:32 PM No comments: 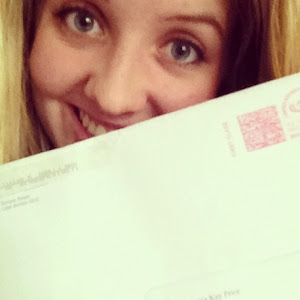